The Arch of Cabo San Lucas 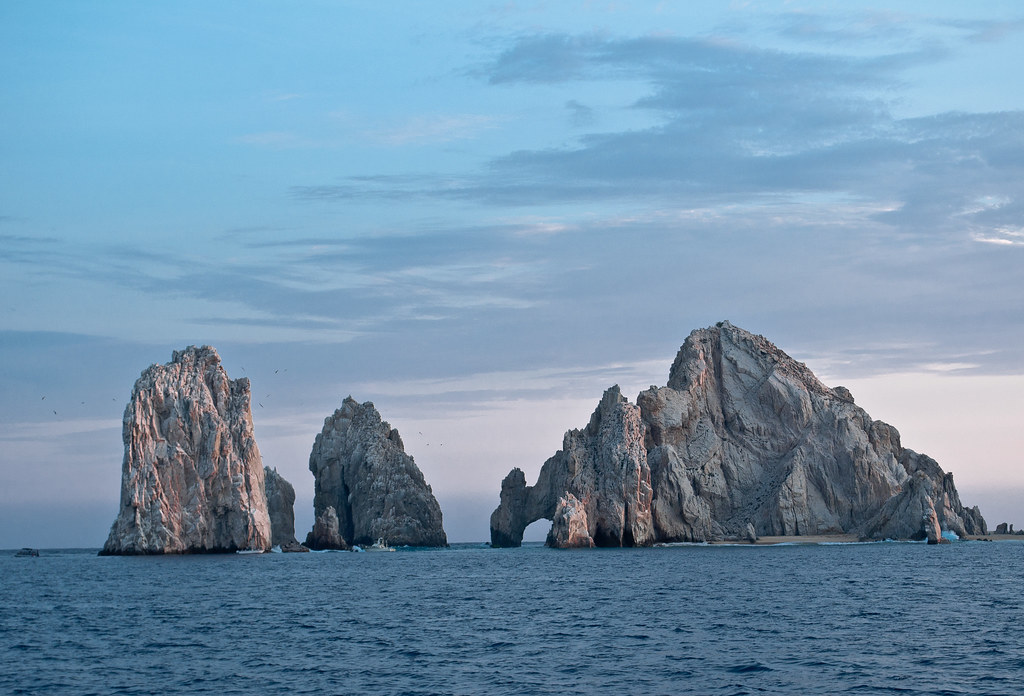 Introducing a place of real intrigue – The Arc of Cabo San Lucas.  In Spanish, it’s called El Arco de Cabo San Lucas.  This amazing arched rock formation is what marks what is called “Land’s End.”  As you’ll see, the name comes from its location.  As such, it’s located right on at the southern end of the Baja California Peninsula.  When you’re there, it’s accessible by boat.  And, it offers so many great activities both in the water and out of the water that you’ll never get bored.

Being called “Lands End,” this amazing place is where The Sea of Cortez meets the Pacific Ocean.  Continue reading to discover all the many exquisite features you’ll find at The Arc of Cabo San Lucas.  Then, learn a little history about The Sea of Cortez and the Baja California peninsula.  Now, let’s begin…

The end of the world – The Arc of Cabo San Lucas

After you arrive at Land’s End, you’ll enjoy a great variety of sea creatures.  These include friendly sea lions that spend time soaking up some sun.  And on your way there by boat, your boat captain will inform you about everything you can expect to see.  Therefore, make sure to bring your camera and take many pictures.  You’ll truly enjoy an adventure that you’ll never forget.

In the past, The Arch of Cabo San Lucas was known as the end of the world.  That was due to the fact that nothing but ocean could be seen to the south – it’s located at the southern end of Mexico’s Baja California Peninsula.  Also known as a cape, this awesome limestone rock formation is awe inspiring when you approach it.  And, when you look beyond it to the south, you can imagine why early settlers called this “the end of the world.”

What is the Baja California peninsula?

Here’s an amazing fact:  The northern part of the Sea of Cortez almost became a United States sea port back in the 19th century.  This is what happened…

Once the Mexican-American War came to an end back in 1848, negotiations were underway with Mexican President Antonio Lopez de Santa Ana.  Up for grabs was the land at the northern part of The Sea of Cortez – the land bridge between Baja California Sur and main-land Mexico.

Before the Gadsden Purchase in 1854, which gave the U.S. the southern portions of Arizona and New Mexico, President Antonio Lopez fought hard to keep that land bridge.  As a result, the U.S. allowed Mexico to keep this land bridge, which included the bustling metropolis of Mexicali.

Being the second-longest peninsula in the world, Baja California measures 775 miles in length.  For perspective, the northern end starts at the southern US border.

Baja California was thought to be an island

Once this land was discovered, the peninsula of Baja California was thought to be an island.  Of course, that was before it was properly surveyed.  But, for another century, it was still marked on early maps as an island.

The amazing Sea of Cortez REVEALED

As one of the most biologically-diverse bodies of water on Earth, the Sea of Cortez extends almost to the US border on the north end.  the northern end starts where California and Arizona meet and terminates at the Pacific Ocean to the west.

Many Americans, Canadians, and people from other countries choose to make Los Cabos and other magical towns in Baja California Sur, Mexico, their home or vacation home.  Discover how to purchase your dream home in Baja.  Make an appointment with the top Real Estate Broker in Baja: Nick Fong, featured on HGTV’s Beachfront Bargain Hunt.

Since 2010, Ronival has been helping clients find the best homes in Cabo and throughout Baja California Sur. And, they’re highly-skilled negotiators that’ll get you the best price. Whether you plan to buy a property or quickly sell your Baja real estate, they’ve got you covered!

If you’d like to take a tour of a property in Cabo or anywhere else in Baja California Sur, just click CONTACT to inquire.  Or, call directly at 619-831-2000.  Ronival will be happy to answer your questions.  You can also schedule a time to show you around this breathtaking location.

See Nick Fong in action on his Ronival YouTube Channel.  Find his videos on the Rovival VLOG, where you can read a short, yet in-depth post.  Below is an example of one of Nick Fong’s Ronival videos:

Thank you for reading See why it’s a great time to be a real estate agent in Los Cabos.  Be sure to read other posts about Cabo and Baja California Sur on the Ronival blog. There, learn about the many wonderful aspects of Baja California Sur, Mexico, from blog posts like this.

For exclusive news and market updates.
Skip to content